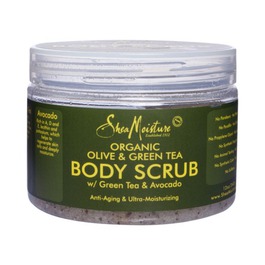 Over the last few weeks, I have been stocking up on Shea Moistures body scrubs. I love those things with a passion. I have around three of them sitting in my bathroom as of now. I have the Olive Oil, Lavender, and the Coconut one. I have also tried the Lemongrass, would have got another but it was not in the store when I went to reup the other day. 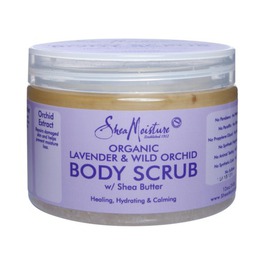 I used the Lavender one this morning, it has a very strong lavender scent as to be expected. Inside the jar I had you can actually see some of the flecks of the orchid flower. It also doesn’t seem to have the same amount of oil as the Lemongrass and the Olive.  I know one thing, after I stepped out the shower I was felt like sleeping. On the label it says it is hydrating, healing and calming. Either I tricked myself into a state of relaxtion, or this scrub is the truth during a shower before bed. The scrub itself seemed to be a smoother grain, when compared to the Lemongrass and the Olive Oil. The Lemongrass scent, claims to be uplifting and purifying. I must say that this was the first scrub that I purchased from the Shea Moisture brand. I enjoyed the thickness of the grains of the scrub, I loved the lemon scent. I mostly would use it when I was just getting up, and wanted a boost of energy. The smell of lemons have just always made me feel happy. I would definitely buy it again.
Olive Oil and green tea has to be my absolute favorite out of all of them. I have already went through almost two jars of the Olive oil one. It leaves my body feeling spectacular. As soon as I rub it in my body and step out the shower, I don’t even need to use lotion afterwards. I just can’t explain how much more I enjoy taking a shower, knowing that I get to use these scrubs while I’m at it. The claims on this one is that its ultra moisturizing and has anti aging effects. I don’t know about the anti aging, but I can atest that this scrub is the business when it comes to keeping moisture in the skin.
I just purchased the Coconut scent last night, so I can’t review it yet BUT if its anything like the others I will love it.
You can purchase these scrubs from Walgreens and Target. They retail for around 8.99-9.99.